I had an early start in the morning to set off on my Stray tour, we were picked up by Nat, our Stray guide/driver at 7:40am in Queen Street and headed off in the direction of Hahei, our first stop. We stopped in the town of Thames to drop a girl who was going off on a 1-day hike, then we all went supermarket shopping for supplies for the next few days.

When we reached our accommodation, which was really impressive, we had lunch before heading off to the Hot Water Beach, where when we dug your own hot pool in the sand.  We all had great fun digging and building sand walls, it was amazing how hot the water became at times, you could actually see the steam rising from the sand.

When we got back to the camp I took a stroll down to the beach, which was simply stunning, areas of it were so stunning that it was used in the Narnia films.

There was 18 in our group, including Nat our Driver/Guide, all from a wide range of counties, males and females from Australia, England, Belgium, Netherlands, Germany, France, Sweden, Switzerland, Croatia, Bosnia and India made up the group in addition to the lone Scot, they were a really friendly bunch of young people. 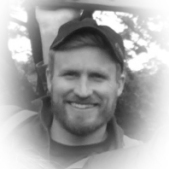 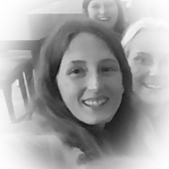 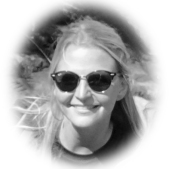 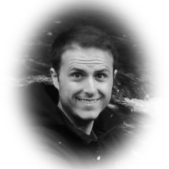 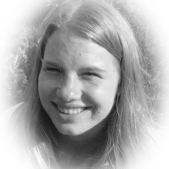 When we got back to the campsite we all sat around chatting and getting to know each other before a barbeque dinner cooked by Nat.  After dinner a group of us went to the local pub, the Pour House, we got there just they were about to close due to the lack of customers, but fortunately, the owner was happy to open up for our group.  We stayed until closing time in this nice brewpub, enjoying a wide range of some very nice Coromandel craft beers, I had a really nice coffee porter called ‘Bean to Heaven’.

On our return, we all sat around the campfire blethering until the early hours.  This was my first night in a bunkhouse and I must admit it was OK and I managed fine, how the others put up with my coughing and snoring is another matter.

This morning after a lazy breakfast I went on the Hahei Explorer boat trip to visit the locations used in the Chronicles of Narnia: Prince Caspian movie.  This trip took in locations like Cathedral Cove and some amazing sea caves, it really was a fun way to see the sights, on a beautiful sunny day.  I returned to the campsite for lunch then took a stroll into Hahei where I had a coffee and a chat with some people visiting from Auckland, I returned via the beach and had a fun time messing about on a rope swing above the beach.

After dinner we all had a lot of fun playing tunes and dancing to music from our respective countries, we then went back to the pub, which on a Friday night was a lot busier than the night before.

Up reasonably early the morning to head to our next stop, Raglan via Hamilton, on the way we stopped in the town of Peroa, Paeroa is the self-proclaimed Antiques Capital of New Zealand and home to the therapeutic spring water which, mixed with lemon, is what is known as the drink, Lemon & Paeroa (or L&P) “World Famous in New Zealand.”  I was quite surprised to find a little piece of street art in the town

We then headed to Raglan to our accommodation for the night at the Lava Lounge at Karioi, we were upgraded in the hostel because the one that we would normally have been in was booked out by another group, unfortunately I was late in getting into a dorm so I had to settle for a double cabin with Kevin, the young German lad.

In the afternoon a few of us headed to the beach to watch the surfers getting lessons and trying out their skills.  On our return, we went to the nearby inspiration viewpoint to watch the sunset.  Our dinner that night was fish and chips from the local chippie, which according to Nat are amongst the best in New Zealand, I must admit that they were very good. 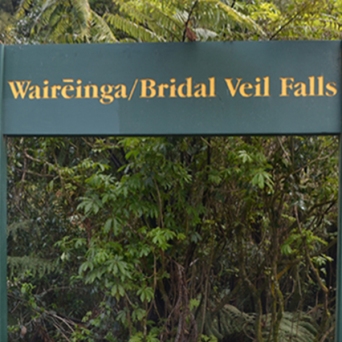 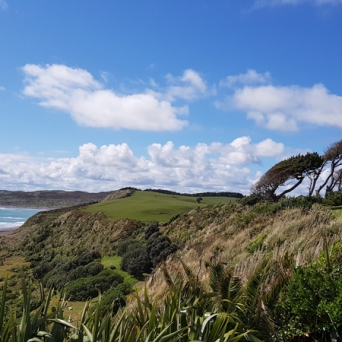 Today we were up earlier than usual as the clocks went forward an hour in New Zealand to allow for daylight saving.   We then headed to the caves at Waitomo, some of the group chose to do black water rafting through the caves while I and many others chose to do the Spellbound tour where we went through the glowworm caves in a boat,  Our guide, Norm, was very good and informative.

After lunch we then headed for Hobbiton, the film set for the Hobbit series of movies, this was an impressive place, however, it was still a little bit exploitative and expensive, it was an experience not to be missed though. 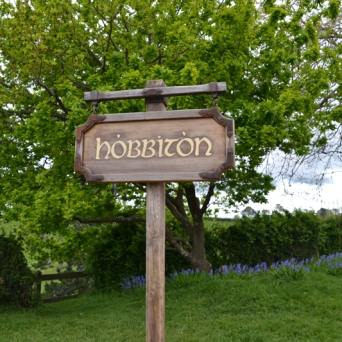 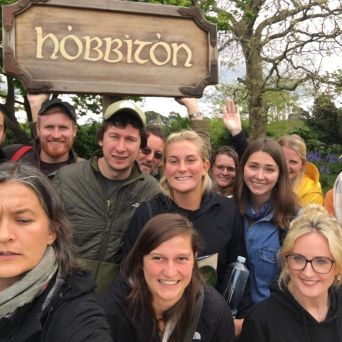 Who is Rosie Cotton?

Oh, look they have a model of me! 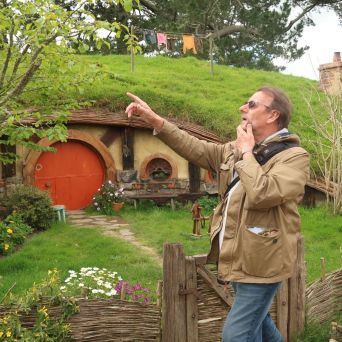 Is that Legolas I’ve just seen

Is this where the beer comes from? 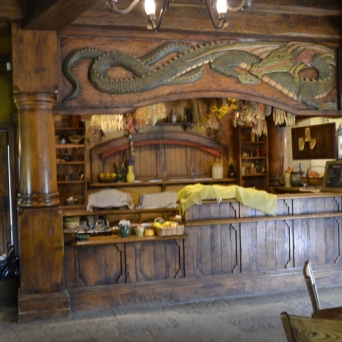 The beer in here is good

I don’t know what came over us

We then were taken to our accommodation for the night at the YHA in Rotorua, this is a very clean and modern place to stay for very little money, I decided to stay in and have a home cooked meal and to catch up on my laundry.  All in all a very good day, but a little on the cold side.

An early morning in Rotorua, After breakfast, I went for a wander around the town and took some photographs before returning to the YHA.  Camille and I went on a trip to Whakarewarewa, a traditional Maori village, where we saw how they used the geothermal springs in their daily life, cooking and bathing in them, it was a very interesting visit, with some entertainment laid on.  Camille and I had great fun trying to make the same kind of faces as the carvings around the village. 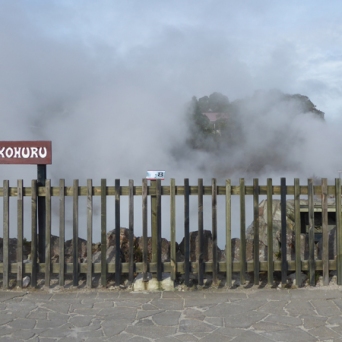 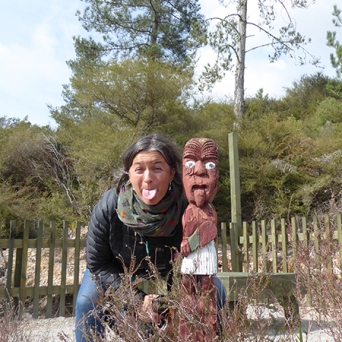 In Rotorua, we regrouped losing a couple from the original group and gaining new members, back on the bus we set off in the direction of our next stop at Kohutapu Lodge, we were met by our guide, Ina, a young Maori girl, who introduced us to her homeland and took us to see some ancient cave carvings and told us some folklore tales of her people, she was not impressed when Dan appeared to disrespect the Taiaha by touching the head on the ground, she made him kiss the ground it touched! The bus then took us to nearby Murupara, a rather poor town with a 1200 population, of whom only 20% are in employment, where we had a short break to buy a snack for lunch.

At the Kohutapu lodge on Lake Aniwhanua, we were given instructions on how to perform the Haka, play the games the young Maori played to develop fighting skills and were taught how to weave with flax.  We watched as a Hangi cooking pit was prepared and loaded it with the food for the evening meal, we even had a mock wedding ceremony between Julia and Marjan.  After dinner, we gathered to listen to some traditional Maori stories before bed. 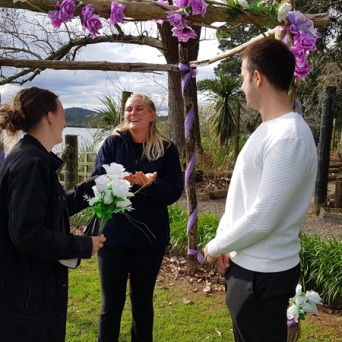 A little rain when we awoke this morning, after breakfast, we set off for Blue Duck Station, our stop for the next 2 nights.  We travelled to Lake Taupo, stopping at Haku Falls to let Astrid go skydiving, a few of the group went for a swim in Taupo while I went for a walk around town and took plenty of photographs.  A shopping stop on the way to Blue Duck Station, then we took a particularly rough road to this out-of-the-way farm/station, after getting our beds sorted we had a Cottage Pie dinner in the cafe there then sat around a campfire talking into the early hours. We lost Mo from the bus but picked up another 6 people in Taupo so the group is changing and building as we go. 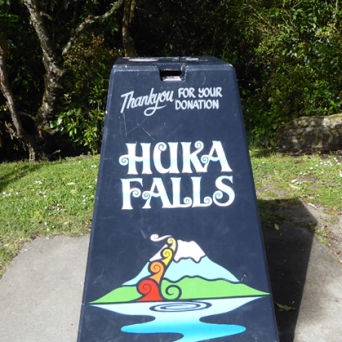 Great fun, we had a long lie in this morning, and as I had booked to do the 4wd safari in the afternoon, I had the chance to relax a bit in the morning, Camille and I prepared vegetables for a pot of soup for evening meal before watching the goats those on the hunting activity had bagged, being butchered and prepared, it was fun to watch the reactions of some.

This afternoon myself and some of the others went on our safari with our guide Graham and we had loads of fun bouncing around over the rough ground, we were taught how to go to the loo in the bush, which was great fun, taken over waterfalls and mud banks, which made for good face cream apparently, it was a really good afternoon.  Again we sat around the campfire talking well into the night. 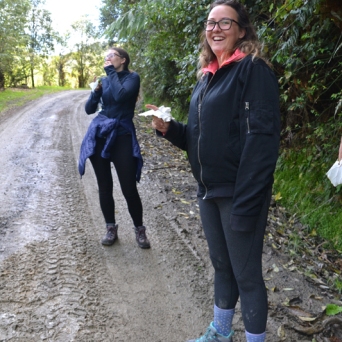 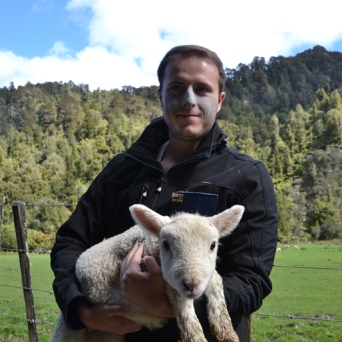 Many of the group had planned to do the 19km, Tongariro Alpine Crossing, but due to a fatality the day before, the route had been closed, which meant a later start time for us.  We went to Mount Ruapehu in the Ritaringa National Park and some went skiing, some for a 5-hour hike, not willing to try both if these activities in the extreme cold, I went up in the ski lift, with a few from the group, to the lodge at the top where we had coffee and a snack watching all the skiers having fun. 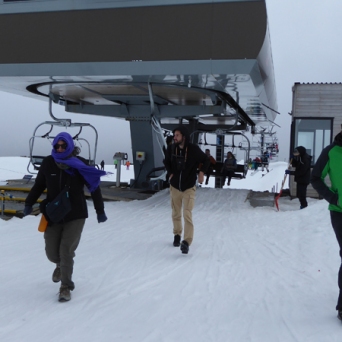 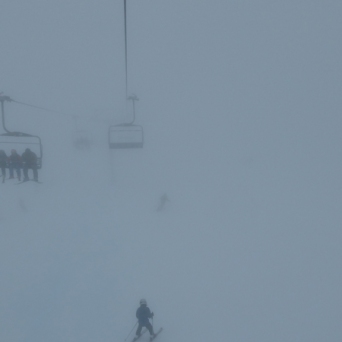 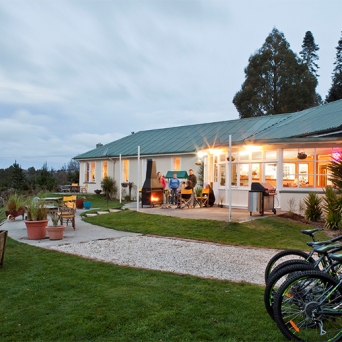 We then headed for our accommodation in the Snowy Water Lodge at Reithai, which was an old nurse’s home and doctor’s accommodation and it was very good, we all had a great night watching the Hobbit, reliving the memories of our visit to Hobbiton. We also had a little ceremony to say goodbye to the Swiss guy, Marïjan, who was leaving the bus in the morning.

A reasonably early start as we left Raetihi heading to Wellington, we made a stop at Taihape, the Welly throwing centre of the world where we had an international competition of our own, we had one further stop in a town called Bulls, which provided some interesting local company names with the word bulls in them.  We also passed through Mangaweka where there is an interesting cafe on the roadside with a 1985 Dakota plane, the place doesn’t have an airport!

Can’t remember why Nat stopped here, but it was nice.

The papa cliffs of Mangaweka are beautiful

Or were they losers?

Mangaweka Cafe in a 1985 Dakota

Mangaweka does not have an international airport, it doesn’t have an airport at all!

Arriving in Wellington, we drove to the top of Mount Victoria, for a spot of sightseeing before going into the city to check into our hostel.  After stowing my luggage, I had a wander around the town and the harbour area reliving old memories of when I visited during my seafaring days.  I was quite pleased to see a plaque commemorating the Shipping Company I sailed with in the old days. 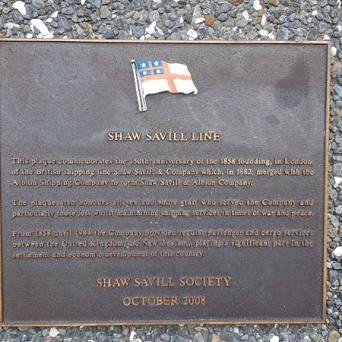 In the evening almost all of the group met in the bar next door for our evening meal, then we all hit the town visiting a few bars and nightclubs, to wish farewell to some of the original group who were leaving and getting to know the new members who were joining the group.

Perhaps this was not such a good idea as we had to get up early in the morning to catch the ferry to Picton on the South Island, to start our journey South.