Queenstown to Stewart Island, and return to Queenstown

According to Stray, this was the start of our Deep South part of the trip, we left Queenstown at 8:00 on schedule heading for Milford Sound but unfortunately there was a fatal road crash just outside of town, which really upset our plans for the day, we were scheduled to be in Milford Sound in time to catch the 3:00 cruise but with the holdup we weren’t going to be able to get there in time, so had to readjust our plans.

We returned to Queenstown for a leisurely breakfast then went back on the road South, we stopped at Garston for a Coffee and at frequent viewpoints to take photographs, and Rhino, our new driver for this route, wanted to have a play around with his Go-Pro drone and camera, which turned out to be great fun.  We even stopped off to see some Kea’s, the world’s only alpine parrot, which was recently crowned New Zealand bird of the year, they were fabby looking birds. 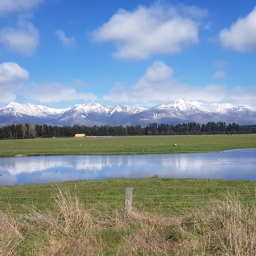 After a stop at Te Anua to buy the Milford Sound and Ferry tickets for the next morning and to pick up a couple of Dutch guys, Mitchell and Tom, we eventually, reached our destination for the night at Gunn’s Camp, a backwater station so remote it didn’t even have mains electricity, never mind a phone or internet connection.  It was a really nice place to stay, with a roaring log fire and we all went out stargazing into the small hours and watched the local deer hunters arriving back in their helicopter with the days catch of 19 deer. Another great day.

Up early in the morning and off to Milford Sound to catch the first cruise of the day, I think this was a good choice as the ship was relatively empty and the light in the sound was really good, the scenery as spectacular and everything I expected it to be, I’m so glad I went as Milford Sound was one of the places I had always wanted to visit all those years ago.

After Milford, we continued to Invercargill where Justine and Martha were staying for the night then headed to Bluff to catch the ferry to Stewart Island. The crossing in a large catamaran, was a bit rough but I was OK, some of the others were a bit unwell. We then checked into our accommodation in the Backpackers Hostel in Oban, the only town on the island, which was very good, clean and welcoming.

Apparently the island is one of the few places where you can spot Kiwi Birds in the wild,  so after a beer in the only pub on the island a group of us, with little red lights and a pre-recorded Kiwi call, headed off into the night around midnight, to try to spot some, it was so much fun wandering around in the dark, up to our ankles in mud at times, listening out for a Kiwi call, as expected we were unsuccessful, but it was fun trying, plus there a full sky of stars to see, it was great fun.

Spent the morning in the hostel trying to dry out my boots after last night’s futile Kiwi hunt, before heading out for a stroll around the bay then back into the village for lunch and a chat with a local guy. I then went back to the hostel to get ready for the return to Bluff.  In the Stray brochure, there was a really good photograph of a signpost for the town of Oban, we went searching for it but could only find the posts, Michael, Dustin, Mitchell and I had good fun replicating the sign. 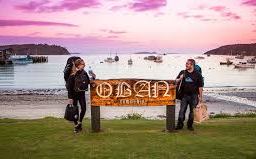 On our return crossing to Bluff, the weather was nice but there was quite a heavy sea which made the crossing interesting, quite a few of the passengers were ill, but I thought it was great fun.

The Stray bus was waiting for us, a stop in Invercargill to collect Justine and Martha, then we wasted no time in returning to Queenstown.  A quick shower and a bite to eat then I went out to meet up with Rhino and the remaining members of our original group, it turned out to be a great night, and it was good to meet up with Dan and Rolf again and to hear all about their travels.