I’ve had a busy few days recently, I took a trip to Edinburgh with my mate Jim, for a change of scene.  We watched some Fringe performers, had lunch and a couple of beers and took some photographs of the Oor Willie sculptures dotted around the city, we even popped down to the Ocean Terminal at Leith. Our visit to Leith reminded me that I promised to post some street art pictures I had taken there last year, they can be seen here.

This weekend I was volunteering at the World Pipe Band Championships in Glasgow Green, this is an event I enjoyed visiting in the past as a spectator so having the opportunity to be involved was much appreciated. I really enjoyed the weekend immensely, hearing some good music, met some great people and heard many tales of how some bands were formed, especially Malaysia’s Sri Dasmesh Sikh pipe band who won the Grade 4B championship in addition to the best for overall and drumming as well as displaying best parade, I had a chance to have a conversation with them and they were all a really nice bunch of guys and the story of how the band was formed was very interesting (their story). The premier award of World Champions of 2019 went to Inveraray and District Pipe Band. 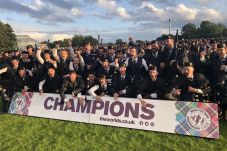