I had to go over to the north of the city for a physio appointment the other day and while in the area I thought I would visit one of my favourite Rogue-One murals, the Cowlairs Incline, on Endrick Street, just off Keppochhill Road.  That led me on to the corner of Hawthorn Street and Balmore road to photograph another of his pieces I have intended photographing for a while, his depiction of a speedway rider advertising the local team, The Glasgow Tigers.  As it was a nice sunny day, I then took a stroll along the banks of the Forth & Clyde canal where I spotted a nice wee naive mural in a wall near the Ruchill church, I couldn’t find out anything about who painted it and why. 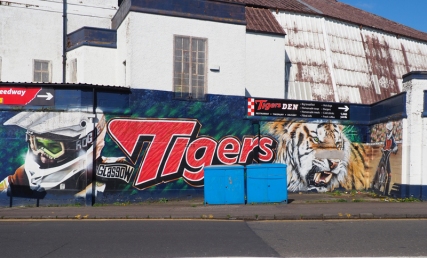 You never know what you will find when out wandering, while at the canal bank, I met 2 young guys who were ‘magnetic fishing’!  Instead of a hook on the end of their lines they had strong magnets, their catch so far that day was a bicycle, a couple of scooters, several bunches of keys and a knuckle duster.  For some reason or other, they didn’t want their photograph taken.