On the rear wall of a 177-year-old temple is a 40-metre long painting that tells the story of early Hokkien immigrants to Singapore. The Thian Hock Keng Mural beautifully illustrates the dreams and struggles of the early Hokkiens, the pain of leaving loved ones behind in search of a better life, and their contributions and sacrifices that have helped shape modern Singapore. The mural is so large I had to split it into sections to display it here.

The last scene depicts the Singapore River.  By the river bank, a grandfather stands with his young granddaughter. Together, they look back at two centuries worth of aspirations, sweat and tears that have made Singapore what it is today.

The street mural was painted by the local artist, Yip Yew Chong in April 2017.
The Thian Hock Keng Mural is a moving work and befittingly found on the walls of one of the oldest and most important Hokkien temples in Singapore.

Near to Tiong Bahru Market, Singapore, beautiful murals stood in a quiet corner within walking distance from my hotel. The murals are more the handiwork of Yip Yew Chong, an accountant who loves art (check his website for more of his works). https://yipyc.com/

The murals depict a scene that is part of Tiong Bahru’s history, giving a glimpse into how life was like in The area in the not-very-distant past.

Due to their size and the multitude of parked cars, it was difficult to get some good photographs of the large murals, the images shown are collages of a collection of photographs.

The best bit about this area of Singapore is that I was able to satisfy my cravings for hawker-style street food as well as taking in the street art (and I got some great photos to boot!) The Amoy Street Food Centre offered everything from international fare and a wonderful set of 5 murals lining the walls near the back of the hawker centre.

They are by the local Singaporean street artist Ceno2 (many of whose paintings can be found scattered around Singapore). My favourite one is apparently quite classic Ceno – the portrait of a laughing Samsui woman who’s throwing up a hand sign which shows off an extra long pinky nail, I liked it so much I used it as a header image on one of these pages. 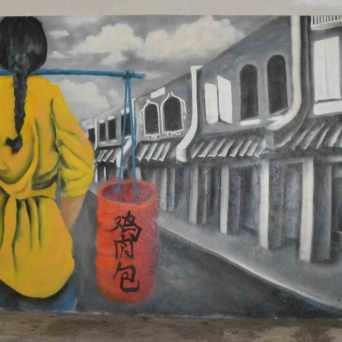 Another pair of collage images is shown below. The first of the artwork is located in Serangoon Road and is named Daily Delivery and was created by Colombian-Belgian artist Didier ‘Jaba’ Mathieu. This mural pays homage to the area’s legendary tiffin (portable meals carried in stacked metal lunchboxes) businesses, a traditional livelihood that has survived until today. Here, a futuristic Tiffin man is portrayed alongside hovering vehicles made from recycled car models, depicting the artist’s vision of a sustainable future that balances tradition and modernity. This was a difficult image to capture in the busy, bustling area of Little India.

Also in this area around the corner from Little India’s MRT Station, I spotted a wall of rainbow-coloured buffalos. This mural was created by Eunice Lim, who has a penchant for engaging the community in her work, apparently, she spoke to former residents of nearby Buffalo Street, who gave her their anecdotes of seeing the old street filled with buffaloes running around. She is said to have invited members of the public (from nine years old to late twenties) to contribute by painting the buffalos on the mural, which are designed with colourful patterns of flowers and clouds. This was another difficult image to capture.

I went back along to Serangoon Road for these Indian dancers, who were not the easiest to photograph because of the location and pillars. This mural was also painted by Didier ‘Jaba’ Mathieu, although the style here is quite different from his Daily Delivery mural.

Also on Serangoon Road is Book-a-Meeting, a mural located next to its source of inspiration, the Siyamala Bookstore. Eunice Lim invites you to consider how heritage, traditions and stories are discovered, by taking you through the bookstore’s 30-year history in Little India, I never managed to capture the full mural, only a section is shown. 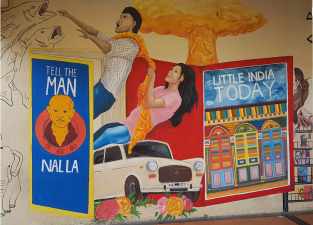 Little India – Various images from around the area

The Traditional Trades of Little India is a mural woven together by local artist Psyfool. It tells a tale of the parrot astrologers, a dhobi (washerman), and the many traders and merchants who settled in the area years ago. 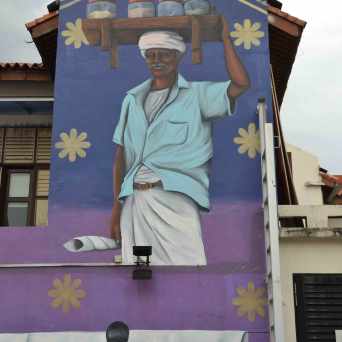 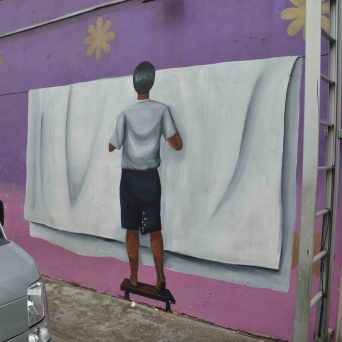 As I wandered around Little India I spotted many good pieces of art, I have yet to identify the artist or the story behind the piece but I have included them here, hopefully, I can find out more about them later. 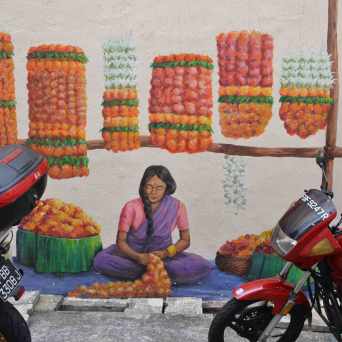 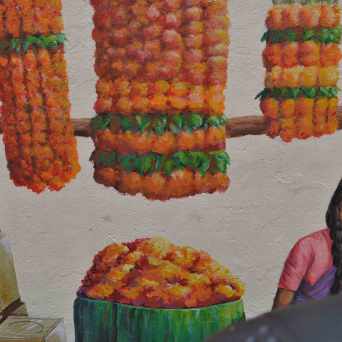 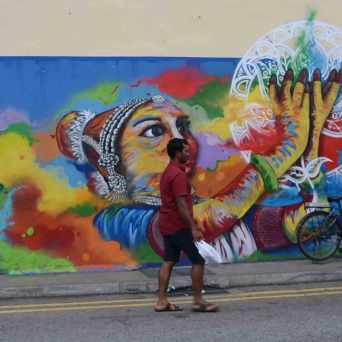 I found a massive dragon which has taken over the facade of a shophouse in the Amoy Street area, this dragon which embodies the heritage of the Telok Ayer neighbourhood was created by Singapore artist Chris Chai.  My photographs do not do it full justice, it really has to be seen in it’s entirety. 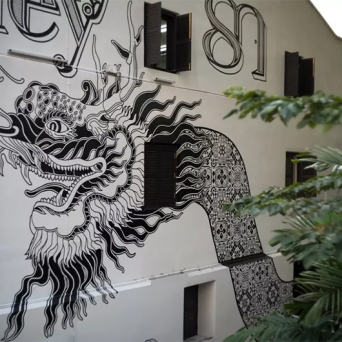 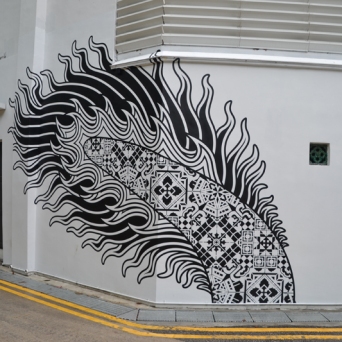 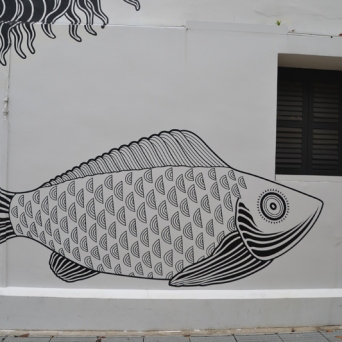