For this trail, I followed the route shown below.

An interactive map is available here, which will allow you to see exactly where each piece is located.

For this trail of approximately 4km, I started in Glassford Street near the Trongate to catch a #2 Simplicity bus for Baillieston to take me along the Gallowgate and Westmuir Street to its corner with Old Shettleston Road, it’s easy to know when to get off the bus, just ask to get off at the Giraffe!

This 2014 large-scale mural named, in typical Glasgow fashion, ‘You’re having a Giraffe’ is strategically placed at the junction of Shettleston Road and Old Shettleston Road at was is known locally as the ‘Gushet’. As it stands, it appears to be eating some vegetation growing out of the tenement brickwork.

Heading back along Westmuir Street I found The Shettleston Tree, a 3-dimensional mural fixed to the side wall the Day-Today store at the corner of Muiryfauld Drive. Not much is known about this strange wall mural, which depicts two silver trees, whose leaves each has a name etched upon it. The local story is that two warring gangs were persuaded to put aside their differences and that the tree was created by members of both, to commemorate those they had lost in their street battles.

Leaving Shettleston and the trees behind, I continued along Westmuir Street to Crail Street to see a spectacular mural by Becky Bolton and Louise Chappell AKA Good Wives and Warriors, this mural, entitled ‘The Peoples Painting’ was commissioned by the BBC with an accompanying documentary to celebrate the Commonwealth Games in Glasgow, adorns the gable end of a building as you enter the street. The mural is very detailed with elements that depict the character of the city, I love the ship in the old Irn-Bru bottle, I feel that my photographs don’t do it full justice.  Adjacent to it is a mural which looks like it was created by local children, perhaps they were inspired by the larger one. 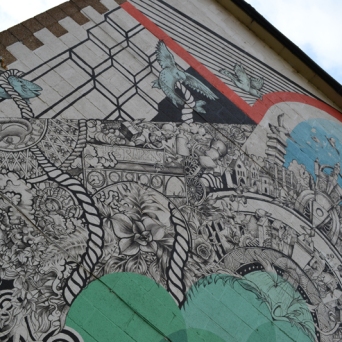 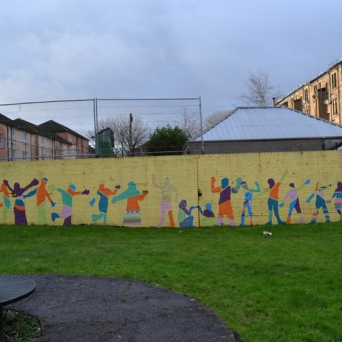 I then continued walking along Gallowgate heading towards Abercromby Street (there are plenty of buses heading that way). Going down Abercromby Street towards London Road there is a nice little mural on a wall at the corner of Millroad Street. This mural, which replaced an early one which was heavy tagged with gang slogans, depicts the area’s historic ties to the weaving industry.

I had a fairly long walk and felt that I deserved some refreshment, it was purely coincidental that this trail ended less than 500m from West Brewery so I decided to stop there for a pint before catching a bus back into town, as I passed down Abercromby Street I discovered some interesting pictures on the walls of a gym, I know nothing about who or when they were painted. 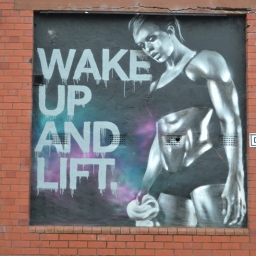 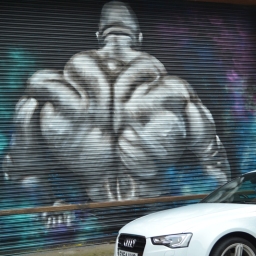