Another visit to the city to take photographs of street art, this time I decided to visit the City Centre, Charing Cross, and Anderston areas.  As I was going to be walking for most of this route I took the bus from home to Charing Cross and started from there.

An interactive map is available here, which will allow you to see exactly where each piece is located.

A copy of the map is shown below to highlight the route I followed. 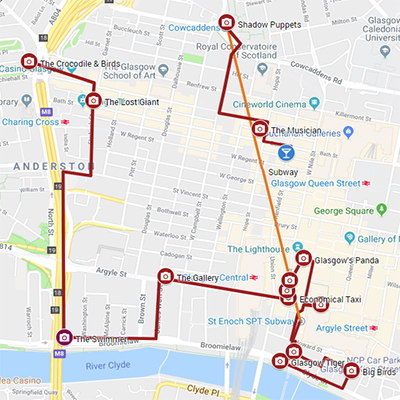 From my bus stop, it was a short walk to North Street where I found James Klinge’s amazingly detailed ‘Crocodile’ and the ‘Charing Cross Birds’, which are on the pillars supporting the overpass at the busy road system. The Birds were created by Art Pistol and Little Book Transfers in a continuation of their ‘STALK’ series depicting birds, foliage and fruit together. 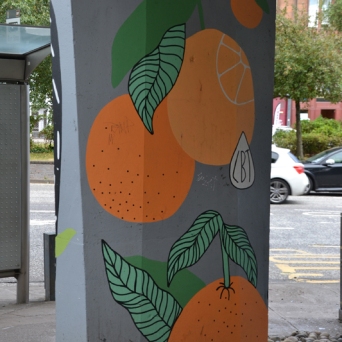 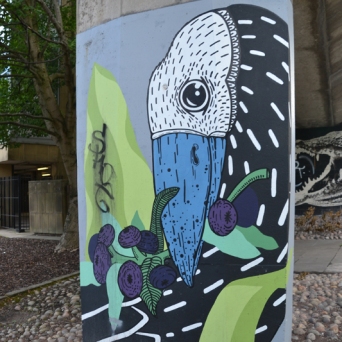 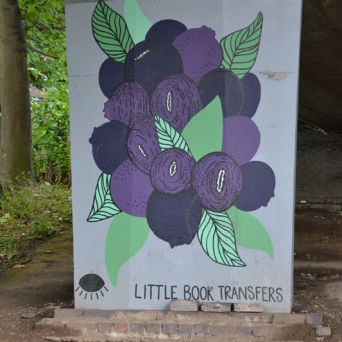 Leaving Charing Cross, I headed to Sauchiehall Street and down Elmbank Street to see ‘The Lost Giant’ by Australian artist Stormie Mills, who has created and installed across various major towns and cities all over the world. The Glasgow ‘Lost Giant’ is specially decorated with a scarf made from the Glaswegian tartan. The atmospheric character stands over the entrance to Sauchiehall Lane, adjacent to the well-known traditional pub, The Griffin. (Due to the narrowness of the lane, it was difficult to get a good angle on the photograph) 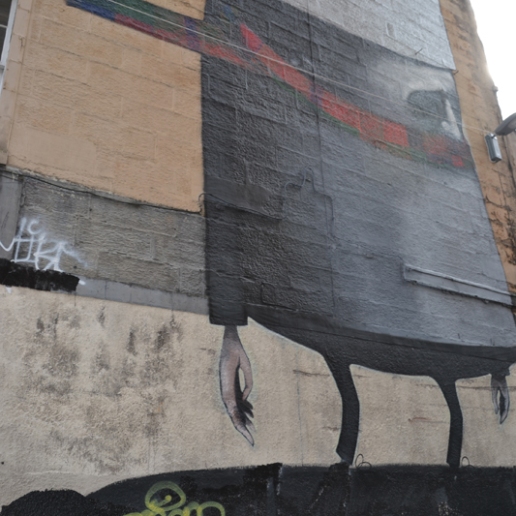 I then headed west to Newton Street, which runs parallel to the M8 Motorway to reach another work by my favourite artist, Smug, the ‘Swimmer’, this mural was one of the first commissioned to celebrate the arrival of the Commonwealth Games to Glasgow in 2014. This mural is well known to many motorists, as it’s cleverly placed under the Kingston Bridge at the traffic lights onto Broomielaw.

As the hop-on-hop-off tourist bus passes this spot, this mural is seen by all their passengers, making it one of the most seen murals in Glasgow.

From the Broomielaw, I then made my way back up to Argyle Street to capture photographs of the ‘Gallery’, more of Smug’s work, this is his imaginative interpretation of famous paintings, including Van Gogh’s Starry Night, Munch’s The Scream, and Da Vinci’s Mona Lisa holding a familiar soft drink (Mona Lassie as she’s known locally). 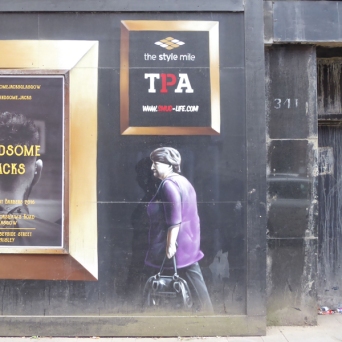 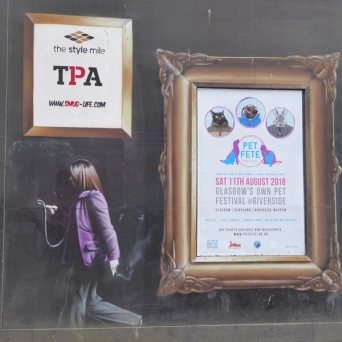 I then continued along Argyle Street to Mitchell Street, this little street which runs between Argyle Street and Gordon Street contains three great pieces of artwork, Rogue One’s ‘The World’s Most Economical Taxi’ and ‘Wind Power’ plus Smug’s ‘Honey, I Shrunk The Kids’, this colossal image depicts a girl with a magnifying glass, if you stand in the right place it looks as if she’s plucking people off the street!

The Most economical taxi, Mitchell Street

Leaving the lane to go into Buchannan Street, I took the lane opposite, at Zara, leading towards Sloan’s pub, I resisted the urge to pop in, and continued through to Argyle Street to take photographs of 2 great murals which are typical of Glasgow humour, the piece by another Glasgow artist, Conzo Throb catches it in a nutshell.

Glasgow’s Duke of Wellington statue, with his traffic cone, enquires “Are ye dancin?” and opposite him, a blue-haired busker replies “Are ye askin?” – phrases heard by many on a Saturday night!  In Sloan’s courtyard area there is also a nice piece showing a wartime bride kissing her new husband while being watched from behind.  perhaps this was the result of the “Are ye dancin?” question. 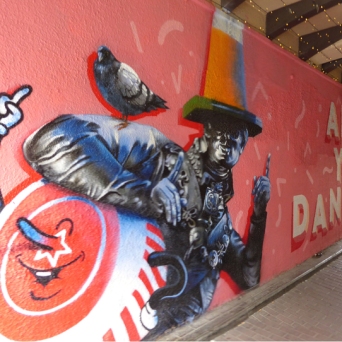 I then cut through St Enoch Square onto Clyde Street for a photograph of James Klinge’s largest piece, a fierce tiger facing onto the river, I first photographed this mural in 2015 as part of a camera course, and at that time we had a model dressed as an assassin, we certainly got some strange looks from passersby.

I returned to the Square facing the gable of the Hootenanny Pub on Dixon Street for the second of the two Billy Connolly murals by Rogue One. This one is a reproduction of the Jack Vettriano painting from the comedian’s World Tour of Scotland in 1994 and is titled ‘Dr Connolly I Presume’, I like Vettriano’s work so this is becoming a favourite of mine.

I went east along Howard Street to Dunlop Street for another of Rogue One’s works called ‘Big Birds’, this piece is designed to raise a smile by depicting exotic birds escaping captivity, sadly many of the panels have lost their vibrancy or have been removed since I first saw this in 2015, this is what happens when a building ages or it’s use changes.

I then returned to St Enoch Square to take an Underground up to Cowcaddens to photograph more of Rogue One’s work in the shape of his ‘Hand Shadow Puppets’ in the underpass at the station, I wish I had seen this when my sons were younger, I always wanted to create those shapes. 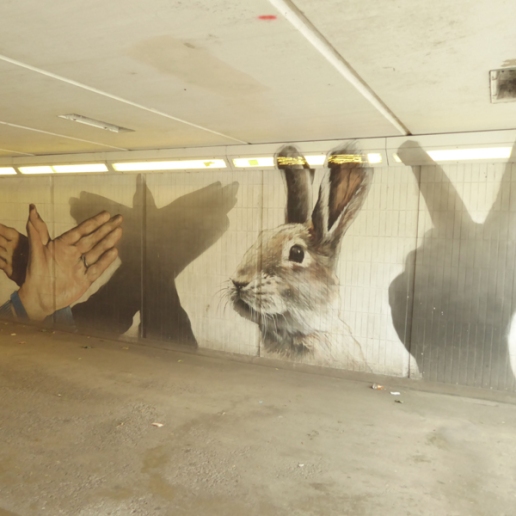 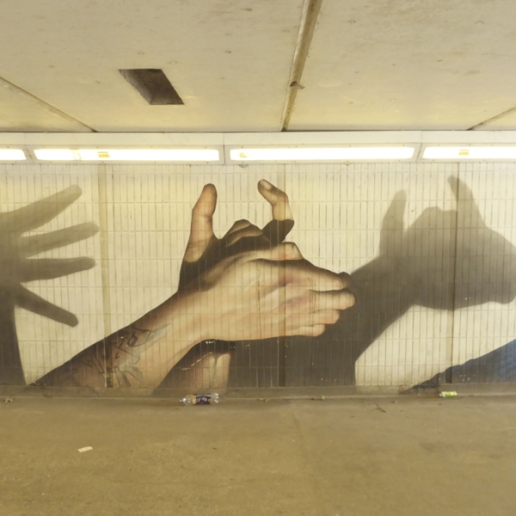 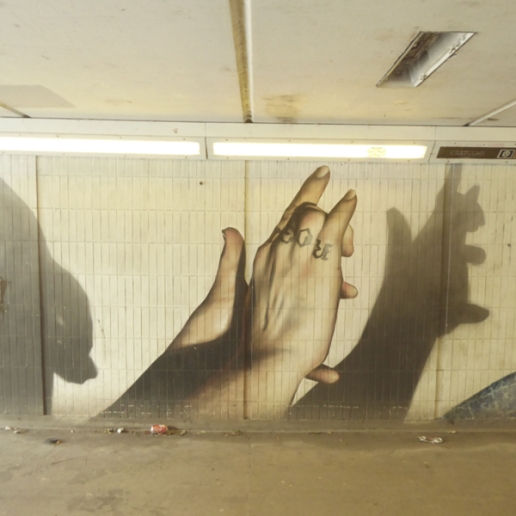 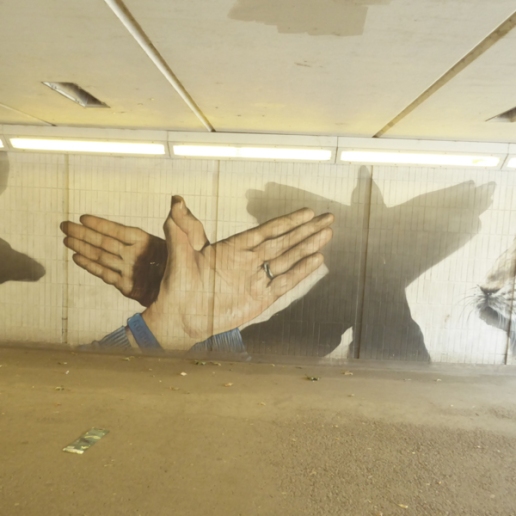 Nearing the end of my journey, I returned to Sauchiehall Street, via Cambridge Street and went to Sauchiehall Lane on Hope Street, between the Watt Brother Store for one of my favourite pieces by Rogue-one, a fantastic mural of a musician with his guitar.

The trail over, I felt I had deserved a pint so I was drawn to Renfield Street and one of my regular haunts, the Raven, where I had a nice pint of one of their craft beers before returning home, tired but happy.

The Raven on Renfield Street