Up at sparrows fart in the morning to get me to the airport for 6 am to catch a flight to Berlin, everything went well and I arrived in the city in plenty of time to take a wander and get my bearings before checking in to my accommodation, the One80° Hostel on Alexanderplatz.  During my walk, I didn’t get to see much street art, but as I had a walking tour arranged for the next day, Friday, I wasn’t too concerned, as I was sure that I’d see plenty.

The first day was mainly about getting my bearings and going to places like the Brandenburg Gate, The Reichstag, Tiergarten, Siegessaule, and Alexanderplatz which was very near where I was staying. In the evening I took a train along Friedrichstrasse to have dinner in the Berliner Republik and Brokers Beirorse, this was an interesting place, the food and beer was very good and, interestingly, the beer prices were displayed on large brokerage screens with the prices rising or following dependant on demand. I took a slow stroll back to a hostel for a well deserved early night, all in all, it was a very good day and set me up for a great stay in Berlin. 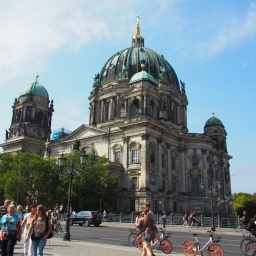 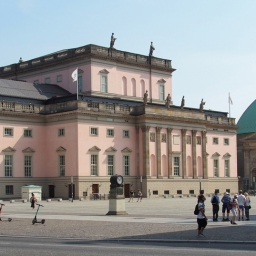 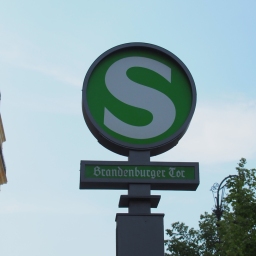 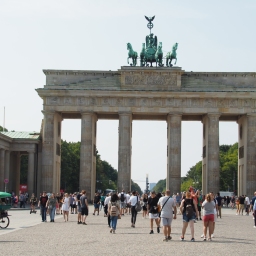 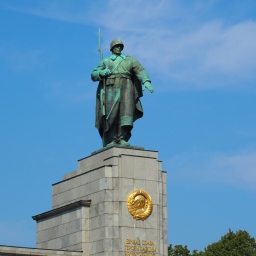 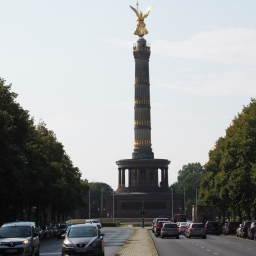 I had a leisurely stroll into town for breakfast before heading to the meeting place for the street art walking tour I was going on, on the way I decided to try out one of the bike tours of the city, so I booked a 3-hr one for the next morning.  Still having time to spare I drifted around until I came across Rosenstraße Park, a little park full of red sandstone sculptures remembering the Rosenstraße protest, which I discovered, was a collective street protest on Rosenstraße (“Rose street”) during February and March 1943. This demonstration was initiated and sustained by the non-Jewish wives and relatives of Jewish men who had been arrested and targeted for deportation, based on the racial policy of Nazi Germany.  The protests continued until the men being held were released. The Rosenstrasse protest was the only mass public demonstration by Germans in the Third Reich against the deportation of Jews.  Opposite the memorial, on the other side of the park, there is a sculpture seated on a park bench, at first, I didn’t know if this was a part of the Rosenstraße Protest Memorial but it is, it’s a reminder of the fact that Jews were forbidden to sit on benches at the time.  I found the park to be very restful whilst being a fitting monument to the power of people. 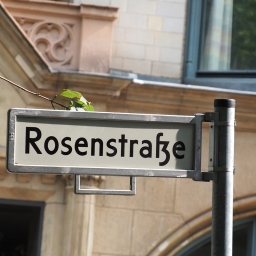 The street art tour was very good and the workshop, which followed, in an old margarine factory in Lichtenberg,  was great fun.  Alex, our guide and tutor was very knowledgeable, entertaining, and helpful as he gave us all a chance to create our own stencil, he then demonstrated a few different painting techniques which we used to create our own piece of ‘art’. 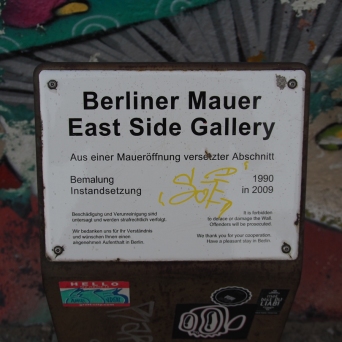 In the evening I took a stroll down to the river Spree to visit the East Side Gallery where there is a graffiti painted stretch of the wall, this is the largest section of the Berlin Wall that is still standing.  The street-side has a great number of pieces of commissioned art, while on the park side there is graffiti created by the local writers. Its an amazing piece of history and, as usual, I took a great many photographs.  On the way back home I stopped off at Holzmarkt where I found another quantity of great artworks, photographs of these can be found on a more relevant section of the site. (See them here).

An interesting day today, in the morning I took a Fat Tires, 3-hour bike tour of the city, led by a Londoner called Rhys, he was an interesting character, who was very knowledgable about the city and its past. Starting from Alexanderplatz we visited many popular sites, some of which I had previously visited on my earlier walk, however, it was good to hear about the history behind many of the sights I had seen before, it certainly was a lot easier on a bike than walking.  During this excellent tour we visited such places as the Brandenburg Gate, Checkpoint Charlie, the Berlin Wall, a building which was typical of Nazi Architecture, Site of Hitler’s bunker (it’s now a car park), the Reichstag (again), Bebelplatz, Museum Island, the Memorial to the Murdered Jews of Europe, Berlin Cathedral, Potsdamer Platz, and a Deathstrip Watchtower 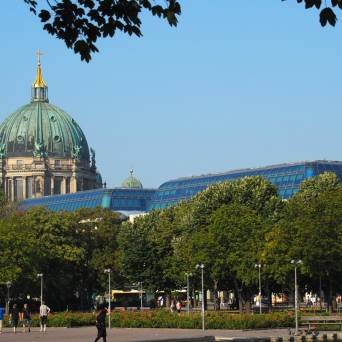 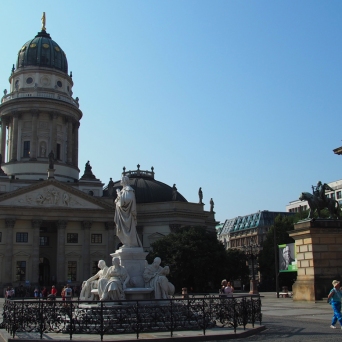 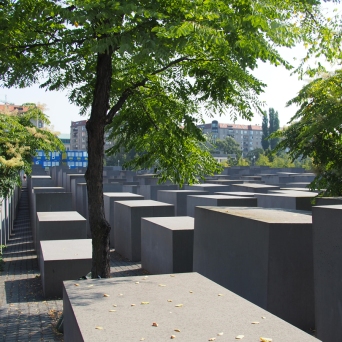 Memorial to the murdered Jews of Europe

When I had finished that tour, I was at a bit of a loose end until I stumbled into another street art walking tour, his time led by Dave Maule, a really nice, interesting guy from Aberdeen, I tagged along and had a really interesting and enjoyable tour with him, visiting loads more places and sites of street art in some different areas of the city such as a street art alley, Hackeschen Höfe in Rosenthaler Straße, again I took plenty of photographs, we finished off this tour in an interesting place called YAAM. (See them here).

A different sort of day today this was the reason I came to Berlin, I was away to the Olympic Stadium volunteering at the ISTAF athletics event being held there. The stadium was extremely interesting and architecture is stunning, there are panel/around telling the story of how it was built and of some of the events held there in the past, it all made for fascinating reading. 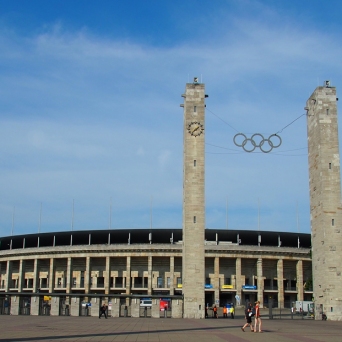 Again I met some really nice people and I enjoyed my time there and would more than likely do it again next year. The athletics were also very good. By the time I returned to the city it was time for dinner so I popped back to Friedrichstrasse and the Berliner Republik and Brokers Beirorse, the food, beer and atmosphere just suited my mood.

A much quieter and relaxing day today, I discovered an app which showed a great number of Berlin’s mural and how to get to them, using the time left tome I went out into the suburbs at the Western Edge of the city to see and photograph the large scale murals at Tegel, 8 murals by artists such as Fintan Magee, PixelPacho, The London Police Borondo and Herakut.  The works are on the ends of 4 high rise buildings situated near Lake Tegel and it was nice just sitting, soaking up some sunshine by the lake. Back in the city, I caught some more photographs from my list before returning to the accommodation to have a rest and to pack my case for the morning.

I finished off the day by going up the TV Tower in Alexanderplatz, which was OK, but not the most impressive tower I’ve been to recently. A nice meal and a beer, in the Standige Vertretung Restaurant, topped off a good day.  Standige Vertretung is German for “Steady Representations”. Apparently, the name of this pub is derived from the political past before the Berlin wall came down when East and West Germany had no regular embassies but “steady representations”.  I deviated from my usual darker type of beer here as I settled for some Kölsch, which reminded me of my time in Cologne.